New Media Citizens and Governance conference (NMCG), started in 2012 by Enough is Enough Nigeria (EiE) partnering with Shehu Musa Yar’adua Foundation. The sole aim was to focus on using new media tools and trends to hold government and public officials to account. In 2012, BudgIT provided resource persons for the conference. From 2016, BudgIT became a consistent partner with EiE Nigeria and Paradigm Initiative to hold the NMCG conference. 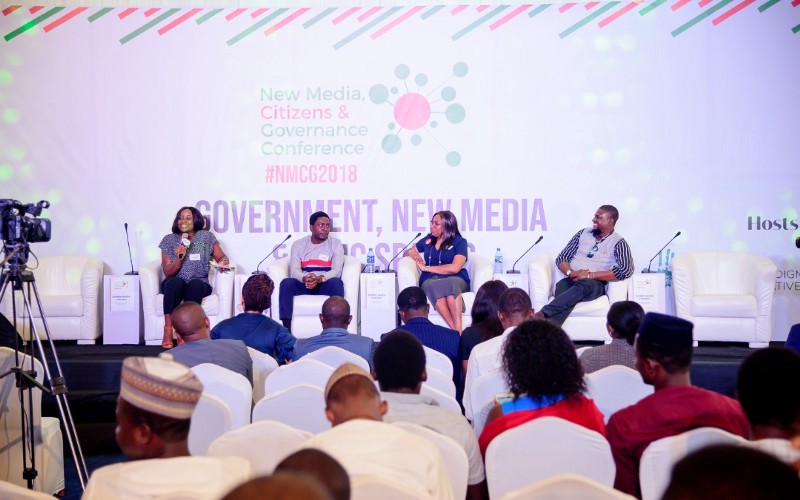 The 2018 edition focused on the forthcoming 2019 general elections in Nigeria. The conference started on the 24th of October 2018 with BudgIT’s Principal Lead, Mr Gabriel Okeowo delivering a welcome address and explaining the year’s theme; “Government, New Media & Civic Spaces.”

Professor Chidi Odinkalu, the keynote speaker, spoke about the challenges of social media and how citizens need to hold government accountable. The pursuit of truth is hazardous, and we must all be ready to stick with the facts continuously as we defend the truth. We must also see through the points of view of those who do not agree with us as this will inch us closer towards good governance while leveraging social media, he said.

The first session titled ‘Are elections won on the timeline?’ discussed how elections are being won and lost on social media, and how social media attacks have created a platform for fake news to thrive. During this session, audience members assumed the role of the INEC Chairman, proffering solutions to problems of the forthcoming 2019 elections.

The second session discussed fake news and hate speech and how it poses a threat to national development. The panelists identified how governments all over the world are trying to curb the menace.

The first day ended with feedback from the audience which centred on the opening speech by the keynote speaker. They also shared tips that drive online citizen engagement.

Recent innovations on electioneering were also unveiled. EiE showcased REVODA, Co-Creation Hub unveiled GoVote, Reclaim Naija showcased its grassroots project, while BudgIT also showcased its beta version of “ElectionTRACK.” The work of partner organizations in holding the government to account with their different platforms and the challenges they encounter were also highlighted; @Tracka on how it holds the members of the National Assembly into account for constituency projects, and @FollowtheMoney on how it tracks the funds spent on a public project.

The second day began with the panel session; ‘Closing Civic Spaces and Constitution 101’ focusing on citizens’ limited knowledge about the constitution due to its ambiguous construction. EiE deconstructed the constitution into laymen’s terms and this document was launched at the conference. The next session had the trending #MeToo campaign as its bane and highlighted the pressing need for sex education. People were encouraged to keep calling out rape and also end the discrimination against rape victims.

Fake news and how it affects several African countries was also discussed in another panel session featuring speakers from Togo, Sierra-Leone, Liberia and Ghana and during the session, it was discovered that the Togolese government denied access to the Internet to stop protests. The next panel session focused on digital security, privacy security breach and solutions to this problem were proposed by professionals from Facebook, CcHub and sister organizations.

The last session of the conference focused on the Entertainment industry and how the industry conducts advocacy using social media channels. Sani Micheal (MC Lively) and Oluwatoyin Bayegun (Woli Arole) spoke on how they have been able to use their channels to pass messages across.

Without mincing words, the conference was well-packed and all-around informative.

BudgIT will ride on the impression gained from the conference to develop “ELECTIONTRACKER” a platform to educate and engage citizens as regards the forthcoming elections. The portal is being designed will be relevant for pre- and post- elections updates. The platform will collect and host comprehensive relevant information about political candidates and their stance on issues of national interest. Through this, citizens would be educated about candidates vying for positions at federal and state levels. The platform would also be used as a hub and one-stop centre for the aggregation of election results across the country.

BudgIT will also launch an election project in January 2019 which will focus on civic engagement. Bi-monthly events to stir up meaningful conversations around the elections will be held at Civic Hive with key actors in the civic space invited as speakers. The event would be streamed via social media to reach a wider audience. For citizens hard to reach via the new media tool, a citizen radio program on elections would kick start in January 2019, employing stations that attract grassroots listeners. This would kick off from the Southwest and extend to other regions of the country, subject to availability of funds. The Tracka team would also produce and distribute IEC materials on elections to citizens for reinforcement.

Other partner organizations — EiE and Paradigm Initiative are also pursuing a course aimed at bridging the knowledge gap between the citizens and the politicians. Already, EiE is leading the initiative to sensitize citizens to exercise their civic duty of voting and staying with their votes till it counts, culminating into credible results.