The Liquefied source of a Coagulating Economy:

An Overview of Governance Challenges in Nigeria’s Extractive Industry. 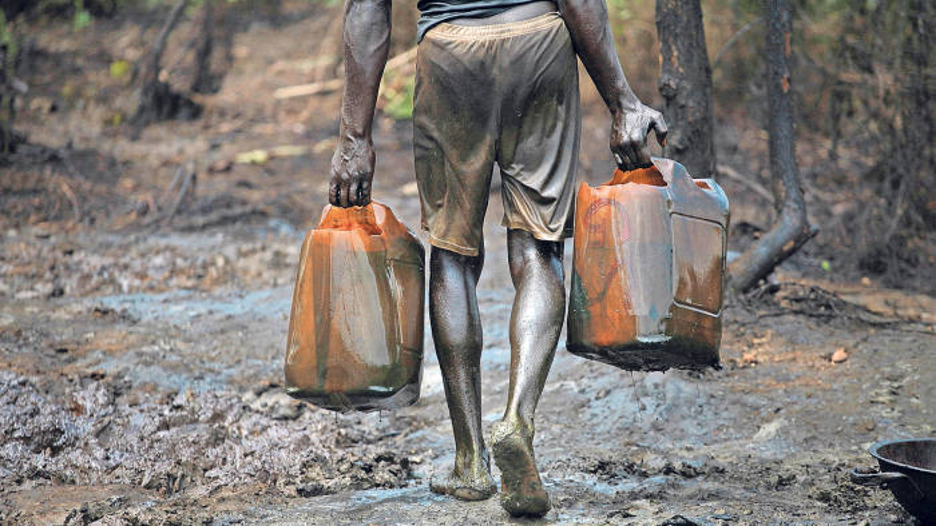 The key issue remains, that despite the economy being built around a liquefied product, a coagulated economy has remained the reality. Very few Nigerians are beneficiaries of the oil and gas economy and this can be largely tied to irregularities in regulations of the sector. It is therefore pertinent that the Nigerian government find a way to ensure that the oil revenue translates to useful benefit to everyday Nigerians.

The Nigerian oil & gas industry has historically been used to pander to the needs of very few highly placed in the society, however, this is not how an ideal oil & gas industry should be run. The gaps and lack of transparency in the operations of the Country’s national oil company (NNPC) continues to be a major hold back for the country

Immediately after his election in 2015, President of the Federal Republic of Nigeria, Mr. Muhammadu Buhari, appointed himself as NNPC’s Board Chairman and also as the Minister of Petroleum Resources. He did this hoping to checkmate the corruption which has become the middle name of the country’s oil company.  However, the lingering issues he hoped to rectify are still unsolved with the corporation’s budget still not reflecting in the country’s appropriation act, among other opacity issues.  If nothing is done about this impunity, millions of Nigerians could wake up one day to a fiscal storm stirred by NNPC which could invariably trigger a significant macroeconomic instability, crippling government spending capacity.

A common but faulty defence put forward for hiding line items of NNPC’s budgeted expenditure from the National Assembly is Section 7 (4)(b) of the 1977 NNPC Act which allows NNPC to deduct all its expenses from the petroleum revenue it collects in trust for Nigeria. It is worth clarifying that there is nothing in the often-cited Section 7 (4)(b) of the 1977 NNPC Act or in the entire NNPC Act that excludes NNPC from subjecting legal deductions for its expenses – as required by the NNPC Act – to legal budgetary approval of the country’s National Assembly as required by the country’s Constitution and explicitly required by the Fiscal Responsibility Act 2007.

As an example of what is to come, a leaked memo in January 2018 between NNPC’s Board Chairman and NNPC’s General Managing Director (GMD) revealed that as at December 31st 2016, current liabilities of NNPC Group exceeded current assets by N3.3trillion and NNPC’s total liabilities amounted to N7.57trillion, making it impossible for it to finance importation of petroleum products.

The seriousness of this problem is evident in the financial year 2018 during which NNPC reported it had budgeted  to spend N3.78tn across 14 subsidiaries, with a revenue projection of N5.04tn and a projected operating surplus of N1.26tn, 80% of which is supposed to be paid into the Consolidated Revenue  as required by the Fiscal Responsibility Act. As at December 2018, it was observed that NNPC’s actual expenses within the year surged by N1.09tn (or 28.8% above its projected 3.78tn) to N4.87tn even though its projected revenue dipped by -1.79% from N5.04tn to N4.94tn. The implication of the surge in NNPC’s expenses is an erosion of N1.01trillion which should have been paid as additional “Federal Treasury Revenue” into the Consolidated Revenue Fund for expenditure by the governments. This has left the 36 states of the country littered with uncompleted infrastructure projects with some States unable to pay salaries and pensions in some months due to unavailable funds 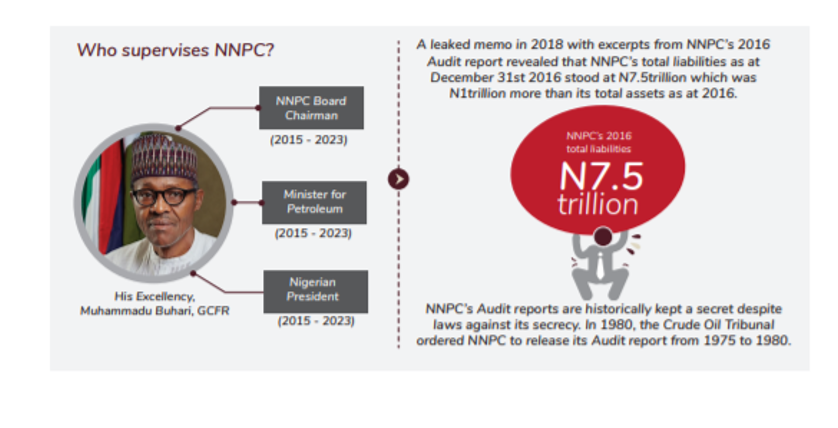 Nigeria’s Natural Resource Charter NNRC recommends that resource-rich countries like Nigeria need to allocate today’s revenue between the current generation who degrade the environment to get resource benefits and future generations who will have to live with substantially degraded environment without those resources. An effective tool for such allocation is through the creation of a fund conceptually referred to as a Sovereign Wealth Fund, SWF. According to the 2019 Natural Resource Governance Benchmarking Exercise Report released by NNRC, Nigeria did not make significant progress in implementing Precept 8 of the Natural Resource Charter which provides best practices for making adequate preparation for future revenue volatility. There are yawning gaps in Nigeria’s current oil revenue savings and stabilization framework which needs to be urgently addressed by policymakers.

Nigeria’s Sovereign Wealth Framework has three enabling laws governing it that require the government of the day to save excess crude oil revenue and a component of non-excess crude oil revenue for the rainy day into five (5) separate funds. These funds are managed by three institutions – the Nigeria Sovereign Investment Authority, NSIA, Central Bank of Nigeria, and the Ministry of Finance. 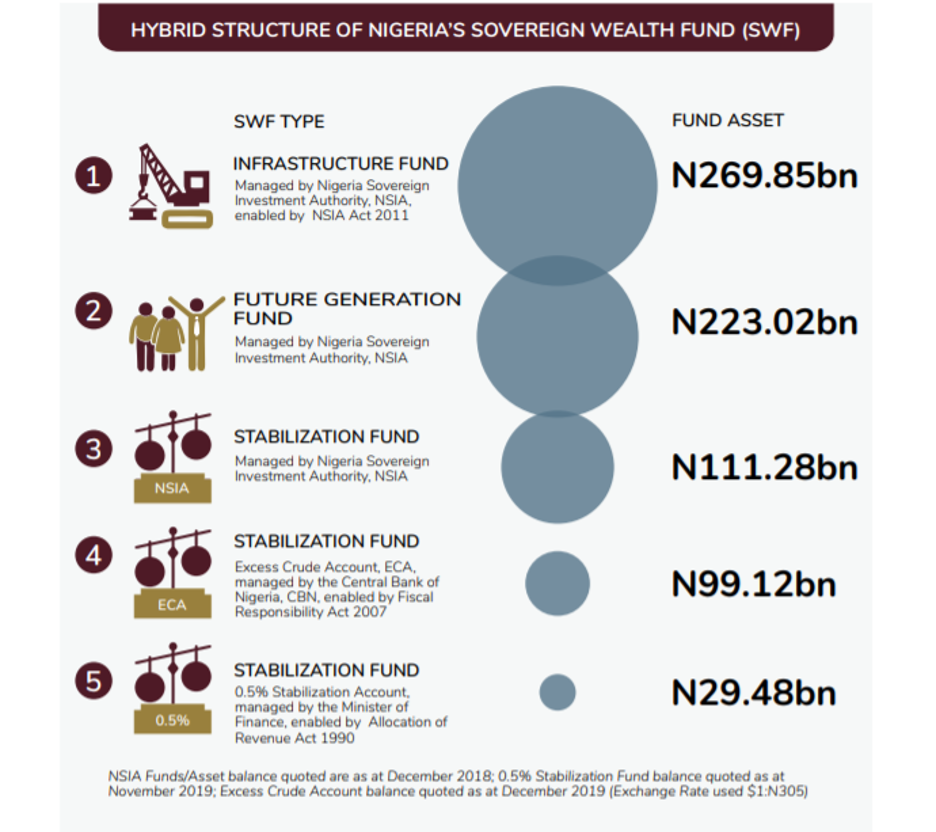 Lack of transparency in subsidy payments persists in Nigeria’s petroleum industry. For decades, the Nigerian government has subsidized and fixed retail prices of petroleum products, a model experts have consistently emphasized is doomed for disaster in the Oil rich west african states. However the Government has continuously shown its reluctance to enact the necessary change to drive up reforms in the sector.  A telling example is that rather than tangibly correct the underlying consequences of a skewed subsidy system (erratic pricing exacerbated by spontaneous industrial actions), instead, the term fuel ‘subsidy’ has now been replaced by “underecovery.” This has created the illusion that Nigeria’s fuel subsidy problem has been eradicated, but the reality is that the NNPC recorded N306bn and N144bn for subsidy payments to oil marketers in 2015 and 2017 respectively, in its financial and operational reports. In addition, the N144bn paid out as subsidy obligations in 2017 was not approved by the National Assembly in the 2017 Appropriation Act.

Whereas,when President Muhammadu Buhari assumed office in May 2015, he vowed to put an end to petrol subsidy from the fuel pricing templates of the Petroleum Products Pricing Regulatory Agency (PPPRA) and allow market forces to determine retail prices at the filling stations. On May 11, 2016, he announced a nation-wide removal of the petrol subsidy. With this, petrol price initially reduced from N87 to N86.50 per litre before adjusting upwards to N141. Later, the price was adjusted further upwards to N145 per litre.

Irregularities in the sector peaked when the government decided to remove fuel subsidy in 2020 despite the pandemic due to the Covid 19 virus. The interest of Nigerians grew due to the impact of the subsidy removal. This however was down to long issues of mistrust and financial management within the government coffers as it was hard to explain to average Nigerians why the increase in petrol prices are justifiable when the mood around government from the presidential villa to the legislative chambers suggest the availability of a largesse in the national wallet.

Although, State Owned Enterprises (SOE) around the world like NNPC are intended to replicate private ownership incentives for government revenue generation, in reality 100% government ownership never truly replaces the market disciplines that drive private sector firms to commercial efficiency as politicians will often avoid critical commercial decisions that have potential short-term political costs. A good example is Norway’s State Owned Enterprise, EQUINOR which is about the same age as Nigeria’s SOE, NNPC but has a hybrid government-private sector ownership structure. EQUINOR operates three refineries that function at above 90% refining capacity because of obligations to make profits for their shareholders while NNPC, which is 100% owned by the Nigerian government operates three KRPC, PHRC and WRPC28 each of utilize less than 15% of their installed refining capacity to produce petrol. Hybrid ownership of such SOEs has been demonstrated to be effective in improving commercial efficiency as it shields politicians from backlash of tough commercial decisions by deflecting ‘blame’ to majority shareholders. (b) Cuts losses that would have been incurred by the country as a result of inefficiencies in the SOEs. (c) Frees up new sources of capital for infrastructure development through revenue from sales of government shares. (d) Helps the country generate more ongoing revenue from increased profitability (even though its ownership stake reduces) as a result of the private sector making more market-driven decisions.

One of the hallmarks of a functional company is the quality of its corporate governance culture which refers to the system of rules, practices, and processes by which an enterprise is directed and controlled. It involves balancing the interests of the company’s stakeholders including shareholders (in Nigeria’s case the government), customers and community (in Nigeria’s case, the citizens). Corporate Governance is one area where NNPC is doing quite badly. There are rules governing how NNPC should operate, but the corporation is selective in how it complies with these rules and processes. Commendably, NNPC discloses some unaudited data via its monthly financial and operations report which contains information about the volume of crude oil produced and lifted for the month, cost per barrel, total sales value, the exchange rate used for dollar transactions, the amount appropriated for the Federation Account, total contribution of the different NNPC subsidiaries contributed to the total crude oil production amongst equally important information. NNPC needs to be commended for putting out more data in the public since 2015. However, selective disclosures of data creates a data vacuum that leaves room for wild data inventions, speculations and allegations by journalists which may or may not have any foundation in reality. Proactive monthly meetings and data meetups with journalists and civil society will help answer questions and quell speculations before they arise.

In Conclusion, A key issue for Nigerians remains that a country of almost 200million people needs effective governance, and this can begin with the passage of the much touted and delayed Petroleum Industry Bill. Hopefully, with the new petroleum industry bill, efficiency can be achieved in the Oil and Gas industry of Nigeria, and the coagulation of financial flows in Nigeria can become a thing of the past

Folahan Johnson is the Head of Extractives Department at BudgIT Foundation, Nigeria